Style Star Of The Week: Penelope Cruz & How to get Her Style!

Happy Monday!
Hope your day is well so far! I'm Tired just like you are! but Let's fight it! Spring is here!
Since It's Monday we have a a BRAND NEW Style Star of the Week: Penelope Cruz & How to get her Style!
Why Her?? well, I love Her style & I always see her on ads on TV & her movies are Amazing! & she's very Classy! 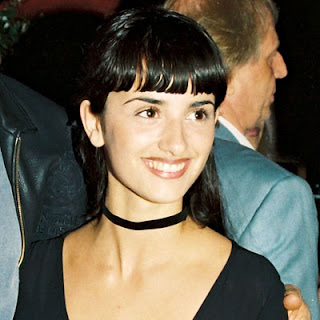 ^^^
taken when she was 18!
(Mini Bio)
Penélope Cruz Sánchez was born in Alcobendas, Madrid, Spain In born April 28, 1974. & is the daughter of Encarna Sánchez, a hairdresser and personal manager, and Eduardo Cruz, a retailer and auto mechanic. She was raised Roman Catholic. Throughout her childhood, Cruz lived in Alcobendas, a working-class town, although she spent "a lot" of time at her grandmother's apartment. Cruz is the oldest of three siblings. she has a younger brother, Eduardo, who is a singer, and a younger sister, Mónica, who is an actress.
Initially, Cruz had no ambition to be an actress and focused on dance & having studied classical ballet for nine years. at Spain's National Conservatory.
She received three years of Spanish ballet training and four years of theater at Cristina Rota's New York school.
She became a fan of movies at age 10 or 11. With no movie theaters nearby, her first relationship with cinema was watching movies on Betamax. Her father bought this "Betamax machine", of which Cruz recalls that it was very rare to own one in her neighborhood at the time.
When Cruz was a teenager, she began having an interest in acting after seeing the film
"Tie Me Up! Tie Me Down!"
by Spanish director Pedro Almodóvar.
She began doing casting calls for an agent, but was rejected multiple times because the agent felt that she was too young But she made it her acting debut was in a music video for the Spanish pop group Mecano's song "La Fuerza del Destino"
Now a HIT here in America & all over the world!
&
Now has 49 Movies Under her belt!
What I love about her Most is her STYLE!
Red Carpet Style From 2009 to Now. 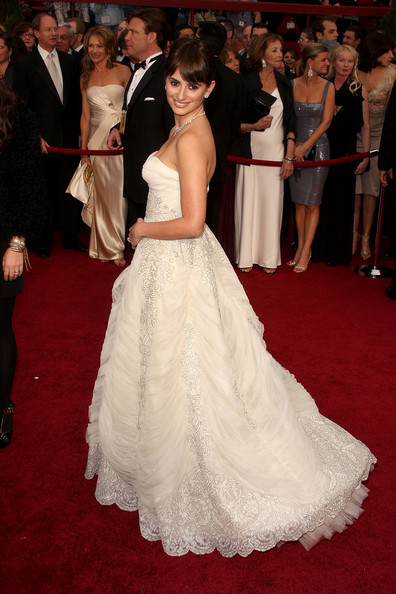 In Feb 2009 At The Oscar's in Wearing a Vintage dress by Pierre Balmain, She saw the dress 8 years ago, and went back to the shop and found the SAME Dress.. & she Brought it! & she won a Oscar's For her Supporting actress for Vicky Christina Barcelona, I love this dress so much! it's very beautiful  & the lace on train is so wonderful.. & very detailed! 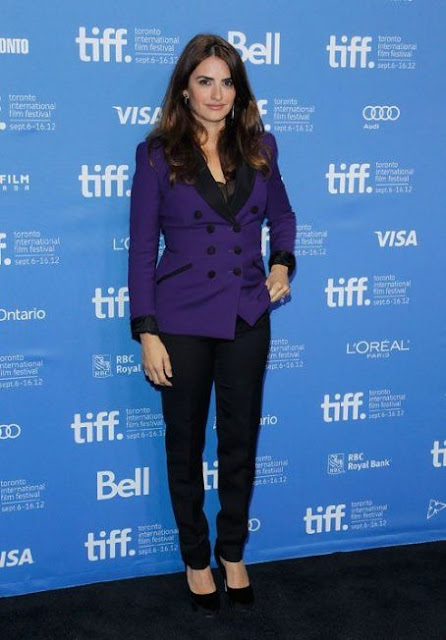 Penelope Cruz headed over to the "Twice Born" photo call at the 2012 Toronto International Film Festival in Toronto, Canada. I love this look! It's all Serious then Purple goes BAM! & brights the whole look up!

Penelope Cruz is wearing a L’Wren Scott cardigan and pants with Ferragamo shoes, as she attends a photo call for her film Twice Born (Venuto al Mondo) At the 60th San Sebastian International Film Festival
(September 25th 2012 at the Kursaal Palace in San Sebastian, Spain)
it's very happy look! I love the colors & the cadi is very pretty! I love on her! 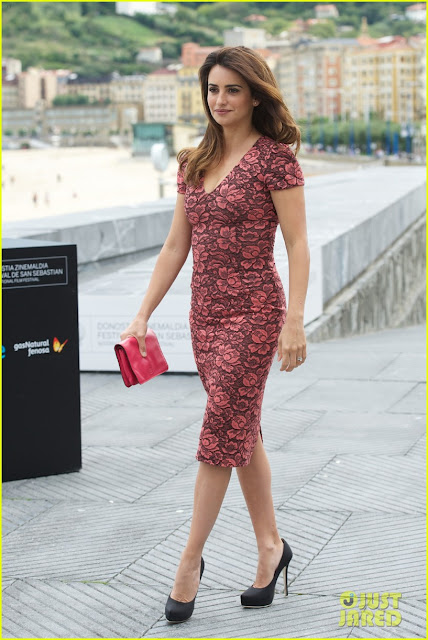 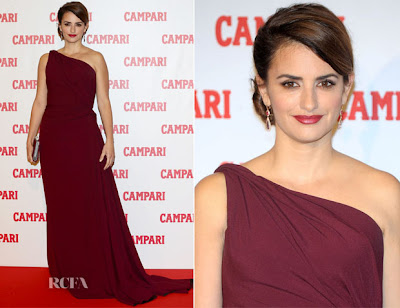 The Spanish beauty wore a custom Armani Privé gown.  This one-shoulder burgundy gown is more like the Penelope I know and love. Her classic gown is both beautiful and flattering.  Penelope styled her look with Chopard jewels, a box clutch, At The Photo call for her Campari reveal for 2013 Calendar with Campari, It's so Breath taking! Now when I see her, I think iof this dressm I LOVE IT! 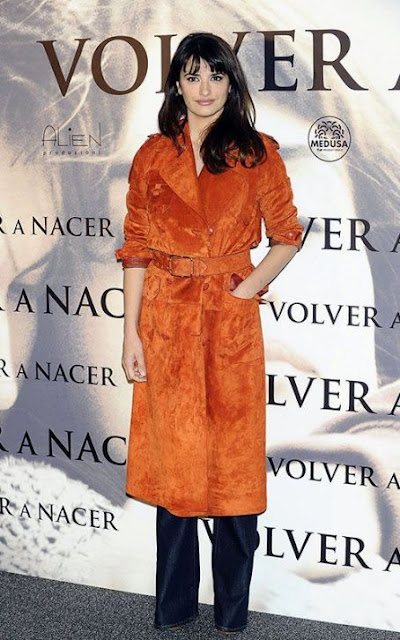 Penelope Cruz attending a photo call for her latest movie, ‘Venuto al Mondo’ in Madrid, Spain On Jan 10th 2013.
She's Wearing a rust suede trench coat from the Loewe Spring 2012 collection which she wore with dark wash jeans,such a Classic look But soo PERFECT On her! Wow.. It's so simple! but looks amazing on her! 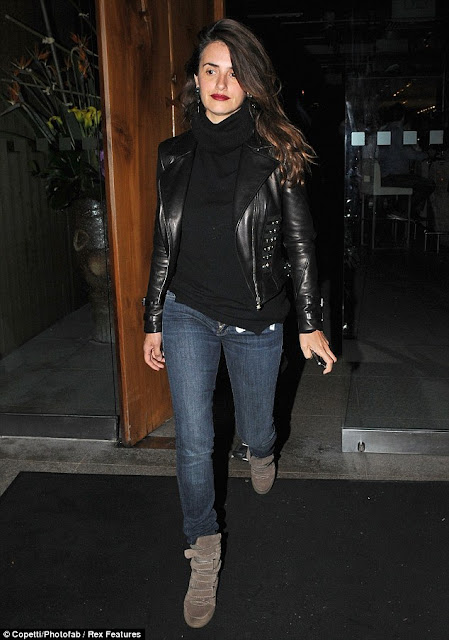 In Oct 2012.
Penelope paired skinny blue jeans with a plain black polo-neck jumper and added a studded leather jacket with a casual pair of tan Isabel Marant high-tops as she left the the Mayfair restaurant With Her Hubby, this Yells this Cool wife Rocker look to me! & she is! the leather jacket & high tops look as if they were made for her. 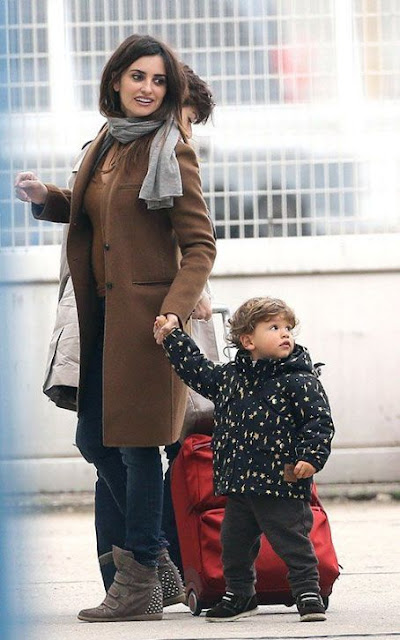 Penelope Cruz & Her Son Leonardo Encinas arriving in Paris on Wednesday,October 24 in 2012.
HOLD THE PHONE! Her Son is SO CUTE! his hair! aww.. I love this look On her, same shoes, she reuses TOO! lol. Very pretty for just getting off the plane! 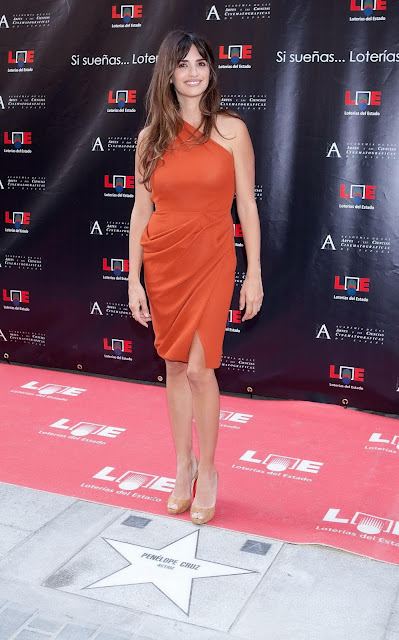 Penelope Cruz In Roksanda Ilincic
At The Spanish Walk of Fame In Madrid, Spain In June 2011.
Wow.. I LOVE that dress! One Shoulder? seems she loves them! Lol. The color looks amazing with her Olive skin tone. 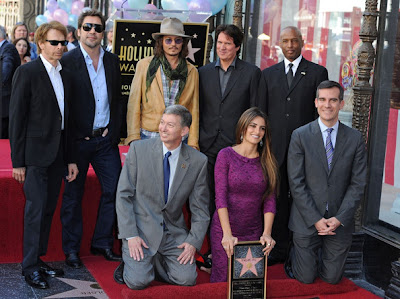 getting her Hollywood Star In LA With her Hubby & Johnny Depp & Jerry Bruckheimer.
Also In 2011.
As you can see she has Classic Style & has a Wonderful Life With Her Hubby Javier Bardem & they one little boy & They are Expecting A second Child! So Congrats to them! 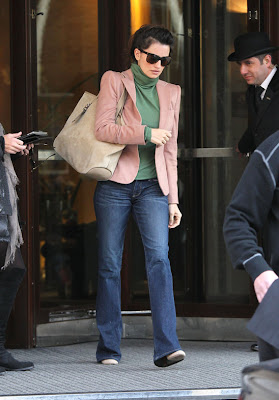 Penelope Cruz was spotted yesterday outside of her hotel in London In Oct 2012 rushing to a car,It's a perfect look for winter or Spring! So I'm going to help you steal her style!

First You need a light green or solid color blouse or turtleneck any color is fine But green would work a Lot better! 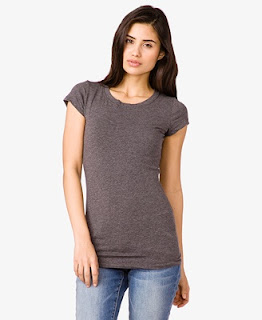 Then You need your Flare or Bootcut, dark wash jeans,Penelope's fav! 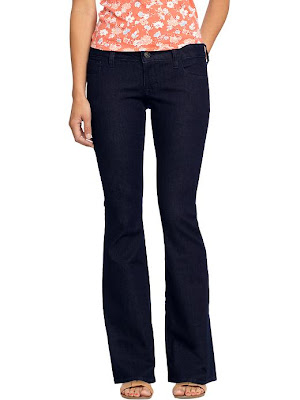 Then You need a Light pink or Pink blazer! 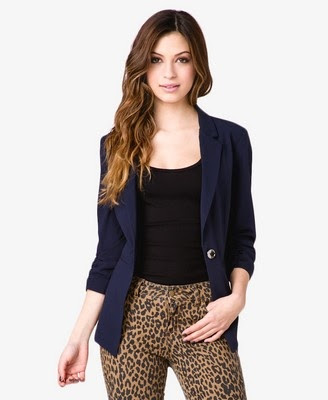 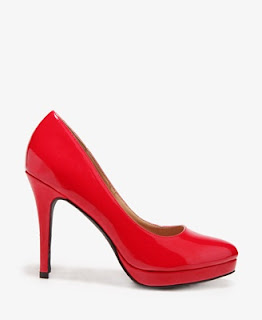 Links Here! & Here!
(Disclaimer Since Penelope Lives in Spain, I couldn't to many photos of her & there wasn't to much info on it.. so I hope This helped you!)

I hope you Enjoyed this Post! I feel so sorry, that I posted it late! please forgive me!
See on Wednesday!

Stay Classy!
&
Have a Wonderful Day!

I love Penelope Cruz. She always dresses very chicly and I've rarely seem her in anything unflattering ;-)

Me too! She does.. & so Beautiful! Yes, That's Very true too! Oh Thank You for stopping By Alicia, Means so much since I posted so late!
Xo Pam <3

Promote Your Page Too